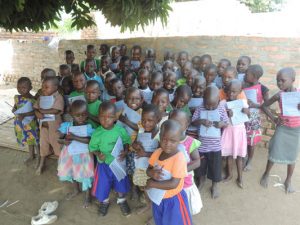 The school aims to improve children’s well-being in the Albert region, especially those who can’t afford to safely go to school.   There are many reasons for these problems.  The nearest government school is far away, and it is not safe for the kids walking to it because Baboons attack the kids on their way to and from the school.  There are no funds to transport the kids safely through the Baboon area.   There are also African cultural biases where girls have to remain home to work in the kitchen and boys have to look after the goats, cows, and sheep at home.  Due to the long walk to the nearest school, few children of the village could attend school.

In 2013 the community formed the Mubaku Community Conservation Organization (MUCCO), a not-for-profit Community-Based Organization (CBO). The community determines what the cost per student would be to each parent.   In 2014, enough parents signed up to hire the first teacher and MUCCO was able to start the school.   The first classes were held under a tree.  Initially, they had to stop enrollment at 73 Children as the school only had one teacher.  In 2015 the school added two more teachers and built a mud and stick shade structure. Attendance was 135 kids in 2018 and by the fall of 2019, with the completion of the first building was 205.  For May 220 attendance is 215 kids.

The village elders (a group of men and women) also decided that their school would accept any child regardless of which church  their family attended or didn’t attend. Many schools in Uganda require the families to attend a particular church   The people of Mubaku attend  Catholic, Presbyterian and   Charismatic  churches or no church at all. The village sees their mission as educating the children of Mubaku

The school has come a long way! 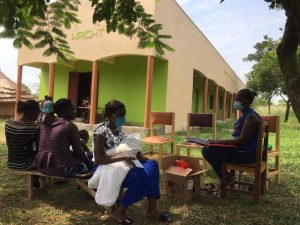 July 23, 2021: Second Building. Three Nursery classrooms and the Women’s Empowerment Center.  Women are attending a health clinic for their babies. 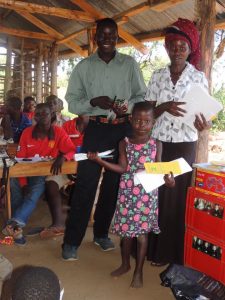 Bright Future Nursery School is three years of schooling that covers the ages three to six.  It corresponds to the USA preschool and kindergarten.

Bright Future Primary School is seven years of education starting at age six.  These levels are referred to as Primary One to Primary Seven.  With normal annual progression, the children are thirteen when they graduate, but often students have to drop out for a while, so it is not unusual to find teenagers sitting in the classroom. At the end of Primary Seven, students take their first major national exam called the Primary Leaving Examinations (PLE).  PLEs have four subjects  English Language, Mathematics,  Science, and Social Studies.

The children have a PE day each week where they play games and form teams to compete.  The students wear different colored shirts with their team’s animal on the back. 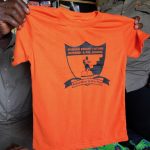 Each shirt has the school emblem on the front 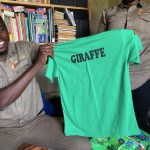 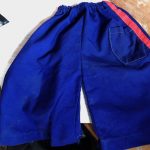 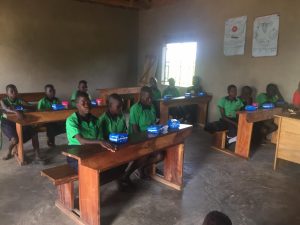 Dona Oyer meeting with her girls for the hygiene class.

An important part of the school is holding classes for the older girls to teach about hygiene and to pass out supplies.

For more on the levels of education in Uganda, go to https://www.theguardian.com/katine/2010/feb/08/education-system-explainer

Click to see video and pictures from the Dec 2018 Bright Future Nursery and Primary School Graduation and Celebration of the schoolhouse’s start of construction.

In 2018 Mubaku Educational Foundation (MEF) was formed to raise funds for the school from donors in North America and Europe. 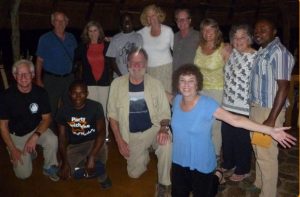 Mama Africa Group bought our first land for the school and also planted trees on it.

In 2014 the Mama Africa group purchased the land, which enabled MUCCO to build the shade structure.  The shade structure allows them to keep on teaching when the weather turns wet. But it does not block the noise from one classroom to another.

The initial goal was to build a four-room schoolhouse with blackboards and desks for the students.    MUCCO decided to build the school as they received the funds.

In 2016 a tourist helped  MUCCO buy six acres to build a permanent structure and fields for the school.   The land is about 600 meters from the original location.   Later in 2016, another tourist gave MUCCO enough money to create plans for the school and then build the foundations of the school.  MUCCO projected it would be anywhere from five to ten years to raise funds to build the first permanent building.

In October 2018, Mubaku Educational Foundation (MEF) began raising funds to complete the entire structure.   MUCCO used local labor and materials to help the Village of Mubaku as a side benefit.  The four-classroom building was completed in August 2018. On September 8, 2019, the new building was dedicated.

Click here to view all construction progress photos for the first building.

This new building will be named in honor of Nancy Wright, a long-time supporter of the school.  Nancy passed away shortly after attending the Primary School Classroom Building’s dedication on September 8, 2019.  The people of Mubaku village have requested that the new building be named in her honor.   Read more about Nancy’s contribution to Mubaku in our November 2019 Mubaku Educational Foundation Newsletter #2.

Contribute to the building of this facility

Click here to view all construction progress photos for the Nancy Wright building. 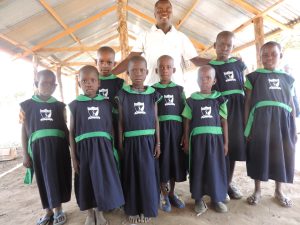 A roll of fabric to make uniforms goes for 380,000  UGX, roughly $100 USD. A roll makes s42 dresses  + 22 pairs of boy’s pants.  However,  since the village did not own any sewing machines, the sewing was done elsewhere.    With the completion of the Women’s Empowerment Center,  foot-powered sewing machines ($208Each)  were purchased as part of setting up the  Women’s Empowerment Center. Now local women are paid to make the uniforms. 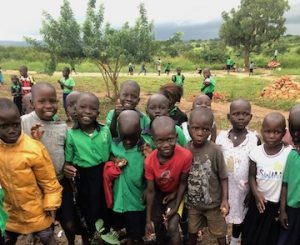 The Ministry of Education and Sports released the school reopening plan on 10th Dec 2022:

Our Enrollment  in February 2020 before the shutdown

(We’ll update these numbers in August 2022.  Numbers are still fluid because of  the shutdown) 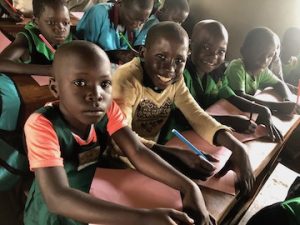